I’m officially lodging a protest to how quickly this year is passing. July, folks. July. Sheesh. At any rate, feel free to peruse my list of entertainment consumed, and tell me what you consumed yourself. Got any recommendations? Lay them on me! 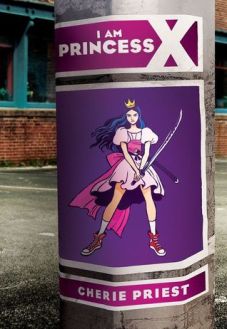 Reading wise, it feels like an unproductive month. I took my time getting through the Bacigalupi because I’m in the process of clearing out my library, and I’m picking up titles I haven’t read yet to decide whether or not I still want to read them. The next month or so may be full of such older titles that I’ve gotten from Paperback Swap. That being said, I couldn’t resist my new releases, and I absolutely loved Cherie Priest’s YA debut, I Am Princess X.

22) I Am Princess X by Cherie Priest
23) The Patriot Witch by C.C. Finlay
24) The Water Knife by Paolo Bacigalupi
25) How to Ditch Your Fairy by Justine Larbalestier (DNF)

I finally got around to getting ONE hardcover off of my pile: Earth One: Teen Titans: Volume 1 by Jeff Lemire. It wasn’t a title I was particularly interested in, as I’ve got no real allegiance to the Teen Titans, but the Earth One titles have been interesting so I gave it a shot. It’s good, though I think my husband liked it better.

As far as individual issues go, I finished up Vertigo’s iZombie series! Not much else on the list, as we’re 1) starting to have our comics shipped to us every other week and 2) I’m letting them stack up again. 🙂

Not much to write home about movie-wise. Of course I went and saw Jurassic World, because Jurassic Park is one of my favoritest movies ever, and of course I’ll always hope against hope that a sequel will rise above the dreck. Jurassic World had some problems, many of which have been analyzed by far more articulate minds than mine, but I still enjoyed it. Raptors are, and remain, my favorite.

Aside from my obvious love of SF and space opera, I should note: Locke is a fascinating film that takes place entirely in a car using cell phone conversations. Really cool. Winning: The Racing Life of Paul Newman is not my thing: my husband watched it with a friend of his, and both of them are super into cars and racing. If you are, you’ll love it. If you aren’t, it’s a good documentary and you might learn something. 🙂

June brought more finales and my first-ever-in-a-long-time rewatch. Some commentary: Community gave us a surprisingly good series finale. It was never advertised as such, but the writing is on the wall and the show clearly knew it.

Let’s see…. much as been said of this past season of Game of Thrones and to those people who’ve finally had enough (not just with the rape, but also the violence), I don’t blame them for deciding to stop watching. I haven’t decided yet myself: a lot will depend on whether or not Winds of Winter has been released before Season 6.

I loved the way Orphan Black tied everything together by the end of Season 3, and I look forward to the next.

I decided to rewatch Hannibal from the start after Season 3 premiered. Hannibal, which is one of my most favorite shows, is one that I’ve been wanting to rewatch for a while, and it turns out, going back to the start while watching the new has been excellently beneficial in terms of both themes, imagery, and so much more. Yes, I know the show got canned. But hope springs eternal, and even if Season 3 is it, the cancellation doesn’t erase the fact that Fuller’s adaptation is one of the best television shows I’ve seen in a very long time.