END_OF_DOCUMENT_TOKEN_TO_BE_REPLACED

How is it June already? I mean, seriously! Time flies when you’re having fun, that is if you consider books, comics, movies, and television shows as fun! Feel free to peruse my list of entertainment consumed, and tell me what you consumed yourself. Got any recommendations? Lay them on me!

END_OF_DOCUMENT_TOKEN_TO_BE_REPLACED

When you’re first starting out, you meet other writers. You read each other’s work. You learn from one another. You struggle in the trenches together and encourage each other. You push each other to be the best writers you know you can be, and then you give each other firm kicks in the ass and tell them to START SUBMITTING ALREADY.

I met Jen Brooks my first term at Seton Hill’s Writing Popular Fiction Program. She was finishing her last term, and her thesis reading is something I remember to this day. That we not only crossed paths but became friends is a defining moment in my writing career, because I’m not sure where I’d be today without her encouragement and insightful critique into my work. I am a better writer because of her, and one day, when I do get published, there will be a handful of people I owe everything to, and Jen Brooks is one of those people.

So it is with absolute and great joy that I announce the release of Jen’s debut novel, In A World Just Right. I’d read it back in the day, before it found a home, and I can’t wait to see how it’s grown and changed since then.

Happy Release Day, Jen! May this be the first in a long career!

Jonathan Aubrey doesn’t have to change the real world to have what he wants.

After an infamous airline disaster killed his family and scarred his face, Jonathan awoke with a magnificent power: he could create worlds at will.

He started by shooting aliens in Jonathan-is-a-hero, then learning sexy moves in Jonathan’s-smokin’-hot-dance-club. Eventually, his loneliness drove him to create Kylie-Simms-is-my-girlfriend, a world that gave him everything the real world didn’t—friends, passing grades, and the girl of his dreams.

But when Jonathan confuses his worlds and tries to kiss the real Kylie Simms, everything unravels. The real Kylie not only notices Jonathan, but begins obsessing over him, and fantasy Kylie struggles to love Jonathan as she was created to do—with disastrous consequences. As his worlds collide, Jonathan must confront the truth of his power and figure out where he actually belongs before he loses both Kylies forever. 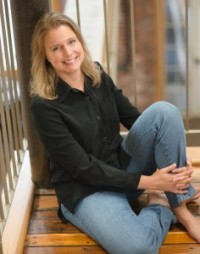 Jennifer Brooks was born and raised in the suburbs of Boston, Massachusetts. After high school she matriculated at Dartmouth College to become a research scientist, but by the end of her sophomore year she felt a calling to the teaching profession. After graduation and fourteen years of teaching high school English, she answered a second calling to write full time while raising her new son. Her journey began with two theses (Prosorinos and Wishstone) for an MA and later an MFA in writing popular fiction at Seton Hill University.

A competitive hurdler and jumper in high school and college, she coached thirty-one seasons of cross-country and track and field, which is why runners show up so frequently in her stories. Jen has also had a lifelong relationship with books – as a youngster checking out a dozen at a time from the library, and as an adult buying books to build her own personal library. She has always been attracted to the science fiction and fantasy genres and claims Star Wars is the single greatest fiction influence in her life. She also enjoys British literature and says Virginia Woolf’s To the Lighthouse is her favorite book of all time, which is why lighthouses also make appearances in her stories.

Running, hiking, traveling, and gardening are Jen’s favorite activities when she’s not writing. She lives with her husband and son on the North Shore of Massachusetts where she writes from her office overlooking their little backyard pond.

You know what’s exciting? Book deals. Book deals are awesomely exciting. And no, I don’t have one, but I have the next best thing: my friend and critique partner Jen Brooks‘ debut novel, In a World Just Right is coming out next year, and there’s a cover and a giveaway too! You’ll forgive me for gushing a bit, won’t you?