It’s been an adjustment to say the least. My husband and I talked about how some of the daily habits we’d come to expect out of Storm Shadow had been tempered by his illness. He’d started spending all of his time in our bedroom (we’d moved his food, water, and litter box there in January, when he first got sick), so in some ways, many habits were already broken.

What really got me today: we decided on a hodge-podge of food for dinner, and after eating popcorn, my brain went through the following thought process:

At which point, I nearly broke down into tears.

The rest of you may be wondering how the hell I went from muffins to Storm Shadow, so I’ll share a tradition of ours:

Greg and I usually keep a couple of Martha White Muffin Mix pouches on hand at any given time. We always keep something chocolatey (of course), but we also keep something fruity too. One day, we just couldn’t decide or agree on what which to bake, so Greg came up with an idea.

He took one of each flavor and lined them up on the floor. Let’s say there were two. Then he left the kitchen and returned with Storm Shadow. He set him down in front of the line and told him to pick our muffin flavor for us. The idea was whichever pouch Storm Shadow touched first was the one we ate.

Which is how the tradition was born.

Sometimes Storm Shadow had to choose between three pouches. Sometimes, Storm Shadow wouldn’t go near them and we had to pick him up and try again, hoping he’d sniff one or the other. Sometimes, we’d have to rearrange the whole thing because what Storm Shadow REALLY wanted was his own food, dammit, and these stupid things on the floor were NOT his food. So we’d place them in the DIRECTION of his food, so that he’d have to walk NEAR one of the pouches, and that would usually do the trick.

So tonight, I wanted muffins, and I remembered we had no Storm Shadow to help us pick the flavor. We ended up eating muffins, while remembering the fun I recounted above, and I decided these are the things I need to record while I still remember them. Because one day, I’m going to bake muffins and I’m not going to remember how we use to do that, you know? It’s not that I want to forget; it’s that I want to be able to come back here and remember the story.

I wish I’d thought to take pictures, or better yet, a video, of Storm Shadow’s excellent choosing skills, but I do, instead, have pictures of him sort-of looking like a muffin: last year, when I bought new running shoes, he forced his way in the shoe box and laid there, even though it was just a bit too small for him.

Though if you asked him, he fit just fine. 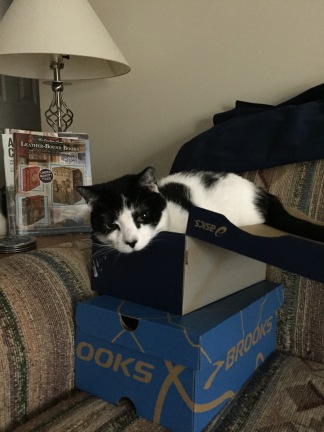 6 thoughts on “Memory: The Muffin Cat”