Matthew S. Rotundo wrote his first story, “The Elephant and the Cheese,” when he was eight years old. It was the first time he had ever filled an entire page with writing. To his young mind, that seemed like a major accomplishment. It occurred to him shortly thereafter that writing stories was what he wanted to do with his life.

Matt gravitated to science fiction, fantasy, and horror at an early age, too. He discovered Ray Bradbury’s “The Fog Horn” in a grade school reader, and read it over and over whenever he got bored in class. (Needless to say, he read it a lot.) Other classics soon followed — Dune and Lord of the Rings and Foundation, the usual suspects. As a boy, he often pretended his bicycle was Shadowfax, and that he was Gandalf, riding like mad for Minas Tirith. Yeah, he was that kind of kid. Half the time, his family and friends didn’t know what the hell he was talking about.

Matt’s story “Alan Smithee Lives in Hell” placed second in the 1997 Science Fiction Writers of Earth Contest. In 1998, he attended Odyssey. The workshop led directly to his first sale — “Black Boxes,” in Absolute Magnitude. In 2002, Matt won a Phobos Award for “Hitting the Skids in Pixeltown.” He was a 2008 winner in the Writers of the Future Contest. He has since continued to publish in various magazines and anthologies, and is the author of Petra, the first book in The Prison World Revolt series.

Matt lives in Nebraska. He has husked corn only once in his life, and has never been detasseling, so he insists he is not a hick.

Editor’s Note: this is part one of a three-part interview. Parts two and three will be published August 9th and August 16th, respectively. Also, this interview was originally conducted in March through July of 2016.

Now, to get started, I ask all of my interviewees the same starting question, and that’s this: how do we know each other?

We both attended the Odyssey Writing Workshop — I in 1998, and you in 2005. We got to know each other via an email group for alums. You graciously volunteered to read and critique an early draft of my novel Petra. (Thanks again for that, by the way). We’ve kept in touch ever since.

I’m really starting to go into denial regarding how quickly the years are passing. Tell me, since my initial beta read of Petra, can you talk about your process from that stage to the published stage it’s at now?

END_OF_DOCUMENT_TOKEN_TO_BE_REPLACED 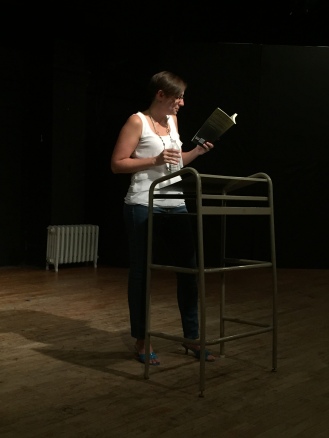 Welcome to third and final installment of Calico In Conversation with J.L. Gribble. If you missed Parts One and Two, click below to catch up:

Editor’s Note: this interview was originally conducted in March through June of 2016.

One thing I’ve admired about your writing career, to date, is how well you seem to manage all the things required of you in addition to writing. You go to lots of conventions (well, more than one to me is a LOT, since I’m lucky to manage one convention per year). Can you talk about your experiences as a small press author at conventions?

Going to multiple conventions and events per year depends on a few different variables for me, such as the reasonable traveling distance (where reasonable can refer to time driving and/or cost of plane ticket) and the price I’m willing to pay for lodging and other necessities. Money is a huge factor in both of these, because I always know going in that there’s no way I will sell enough books to cover the entire cost of the trip. Most authors I know, whether small or large press, are in a similar situation, since we are long past the days of book tours paid for by large publishing houses. In my case, I’m fortunate enough to have a day job that covers these types of expenses (again, reasonably), along with a husband who shrugs it off as the cost of what could be any other expensive hobby.

So because I know I’m going to lose money at every convention I attend, I have a pretty specific criterion about whether I will go. I just have to have the chance to get my name out there. That’s it! I’d like to be on a panel, have a reading slot, have a chance to sign books at a scheduled time, and/or participate in a workshop. Pretty simple, especially since I’m not even asking for free registration, much less lodging, meals, or travel assistance. The drawbacks to this are, of course, that I don’t go to all the conventions I could. Ironically, this means I don’t even go to the two of the conventions closest to where I live, because despite my repeated attempts to volunteer, neither have expressed an interest in including me on their schedule. However, I’ve now been a multi-year guest at a few conventions, and I’m excited to add a few more to the list this year!

END_OF_DOCUMENT_TOKEN_TO_BE_REPLACED

So. The 2015 Hugo Awards were announced last night. I forgot all about it, because I was remembering why I never wanted to work in the food industry again while volunteering at a concession stand at a baseball game to raise money for charity. This morning, I woke up to a thunderstorm, a playful cat, a husband playing Bloodborne, and the Hugo Results.

I have a few links I want to share before I talk about the winners (or lack thereof):

1) Tor.com: Announcing the 2015 Hugo Award Winners: Winners, winners! Read all about it!

2) Tobias S. Buckell: What the alternate Hugo Ballot would likely have been: Toby uses the 2015 Hugo Award Statistics, crosses off all puppy nominees, in order to figure out what the fiction categories MIGHT have looked like without slates informing the ballot. He also has some great thoughts about those nominees, as well as the nominees who were on the puppy ballots and withdrew their nominations.

3) 2015 Hugo Award Statistics: I love looking at this every year, but this year is particularly fascinating. The “what-if” nature of the ballot is endlessly fascinating for me. I would’ve been SO MUCH MORE ENGAGED in this year’s awards if the ballot hadn’t been hijacked by the puppies.

4) Wired.com: Who Won Science Fiction’s Hugo Awards, and Why It Matters: A really great piece that talks about the controversy, the awards ceremony, and what happened after. Kudos to George R.R. Martin for his Hugo Loser’s party.

And now, for my thoughts on some of the winners:

END_OF_DOCUMENT_TOKEN_TO_BE_REPLACED

I don’t want to talk about 2015 Hugos. The ballot has been revealed, I’ve bought my supporting membership, and how I vote is going to be between me, myself, and I.

No, instead, I want to address any and all current and future WorldCon members (any and all) and offer a non-slate suggestion for next year. And yes, I recognize there’s already an SP4 movement, and I won’t be surprised if there are counter-slates, but I’d like to counter anything and everything involving slates with a different idea, so if you’re planning on nominating for WorldCon in 2016 (MidAmeriCon II), this post is for you.

Seriously. It’s for YOU.

END_OF_DOCUMENT_TOKEN_TO_BE_REPLACED

Once upon a time, when I was but a humble book blogger, I could tear through books like a knife through butter. At the height of my blog, it was nothing to post anywhere from 2-4 book reviews per week, nothing to read 100+ books per year. I miss those days, sometimes, when my free time was spent absorbed in fictional worlds, admiring the craft that made those worlds and the people who populated them so vivid and real.