Once upon a time, the only science fiction books you’d find in my hands were Star Wars Expanded Universe novels. I adored them. I read them as soon as I could get my grubby little paws on them, whether I used my allowance, or borrowed them from the library, or cashed in my credit at the used book store. I couldn’t get enough of the stories, because I was so enthralled at seeing what happened to Luke, Leia, Han, and everyone else after the defeat of the Empire in Return of the Jedi.

I’m not sure I would’ve been able to articulate the reasons why, but back then, I was never really excited about any stories that took place between the films of the original trilogy. Not that there were many, mind you, but I realize now there was a good reason. Once the trilogy was over (and the prequels were just a distant dream), nobody really wanted to know what happened between the movies. We wanted to know what happened after.

Of course, since then we’ve gotten the prequels. We’ve gotten Expanded Universe novels so far down the timeline that some readers, like myself, got tired of seeing my favorite characters manipulated by the plot into doing things that never felt true to character. And of course, since then, Disney bought Star Wars, announced a new slate of movies, and officially deemed what had been the Expanded Universe as a kind of alternate reality, divorced from any continuity from this point on.

I’m okay with all of this. 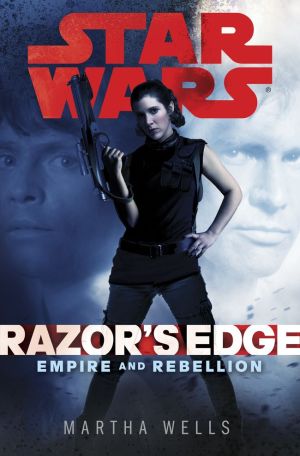 Around the time this happened, Del Rey had announced a series of books that would focus on individual heroes of the original trilogy and fill in the blanks between the movies called Empire & Rebellion. They also got some big names to write those stories: Martha Wells would write Leia’s,  Star Wars: Razor’s Edge. James S. A. Corey would write Han’s, Honor Among Theives. And lastly, Kevin Hearne would write Luke’s, Heir to the Jedi.

Of those books, Han and Leia’s were dismissed to the “Legends” line — the old Expanded Universe continuity. Luke’s got the official stamp of cannon.

All of this is background, not the point of the post.

I’m almost finished reading Razor’s Edge, which is Leia’s story. I became a fan of Martha Wells’ work when I discovered her Raksura trilogy, so I knew this would be a well-written tale.

And it is. But there’s a problem: there is very little tension. The stakes, such as they are, matter little. And it’s not Martha Wells’ fault.

END_OF_DOCUMENT_TOKEN_TO_BE_REPLACED

It’s that time again! Amazing how fast the time flies, but once more, it’s time for another Culture Consumption. As always, I’ll post a list of what I’ve read/watched over the past month, and in some cases, provide some commentary. If there’s anything you’re interested in or curious about, don’t hesitate to ask me in the comments, and I’ll be happy to talk further!

August was actually quite productive. Some of it is due to vacation, and the time I spent in the airport and on the plane reading, but I also spent a few weekends where I said f*** it to the dishes and sat down and read like a fiend. Also, good shows too!