So Happy August! I bring you the belated Culture Consumption for July, but at least this month, I know where the month went: Speculative Chic! So far, so good, but starting a fanzine meant less time for other things, like…oh, I don’t know…READING. I still managed some movies and television though, so let’s take a look at what July had to offer, shall we? 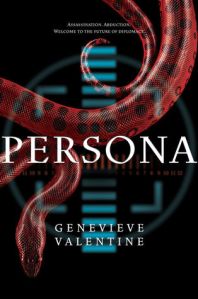 I’ve been meaning to read Genevieve Valentine’s work for a while now, and I’m not sure just what it was that prompted me to finally sit down with Persona (perhaps because the sequel, Icon, had just come out?), but I did. I ended up tearing through the book, which was easy to do, because it hits the ground running so fast it doesn’t feel like a novel. I sat, I read, I conquered, and then I downloaded the sequel and did it all over again. Fascinating series, and the kind of SF that really grabs my attention. I moved on then to Yoon Ha Lee’s novel debut, because I did NOT stop hearing about it. This beast took me a while, because I was in the process of getting Speculative Chic ready to launch, and because despite being space opera, the book is very cerebral, very fascinating, and demands a close eye while reading. Definitely interested in the sequel.

Now that we’ve converted over to mostly digital and/or hardcovers, I’m getting even lazier with my comics. Sure, I have some individual issues to read, but I’m in a position of asking myself if I care to come BACK to a series, after letting it pile up in my TBR for months and months? Of course, I have been busy, but comics may be few and far between from this point on.

So July was an interesting movie month. Yes, I watched The Force Awakens again. It’s my happy movie. And of course, I watched Ghostbusters (my thoughts are detailed here). I also re-watched Moon, which I still really enjoy but lacks some power now that I’ve had four season of watching Tatania Maslany play 20+ characters in one show, but no doubt: Moon helped pay the way for that show, at least technologically speaking.

And yes, I watched Batman v Superman: Dawn of Justice: underwhelmed and unimpressed. I think there’s glimmers of good there (I may be tired of seeing Batman’s origin story in every incarnation, but I liked how it was done as opening credits here, and also it delights me to see Neegan and Maggie from The Walking Dead playing Bruce’s parents), but it’s just weighed down in bloat and bad writing. Really, there should’ve been another solo movie for Superman, and that movie could’ve dropped more hints of a conflict with the Bat coming down the pike.

Batman v Superman: Dawn of Justice
Ghostbusters (2016)
Moon*
Rebel Without a Cause
Star Wars: The Force Awakens*
The Big Short

It was an interesting month for television. We’re continuing our Cheers marathon, of course, and that show is eleven seasons, so we can see the light at the end of the tunnel! Also got a hold of Veep, which remains a very awkward and painful show to watc

h, and I’m flabbergasted that it got renewed, based on where the season ended. And speaking of endings, Penny Dreadful came to a surprise final season, which apparently the writers were working for since season two but wanted to keep it secret so the fans wouldn’t freak out. And I have mixed emotions about this last season. No doubt, it featured some fantastic moments, especially from Eva Green (her stand-alone episodes are always amazing, and “A Blade of Grass” was no different), but the end left me uncomfortable with what the show ultimately had to say in regards to its female leads, and that requires more pondering.

Oh, and my husband is on a mission to introduce his parents to better television, so we’re showing them Justified, which is fun, because I still remember last year’s finale, and can make connections now that I’m rewatching from the start.