When Disney first acquired Star Wars, when they announced the new trilogy, I was excited to the point of giddy. I was flabbergasted. Gobsmacked. Because I am, first and foremost, a Star Wars fangirl, and Star Wars will forever be my first fandom. Oh, I loved plenty of things before Star Wars: My Little Pony, Jem and the Holograms, MacGyver… but Star Wars was something different, something that continued, something I wouldn’t outgrow. To this day, watching the original trilogy is like snuggling up with a favorite blanket. 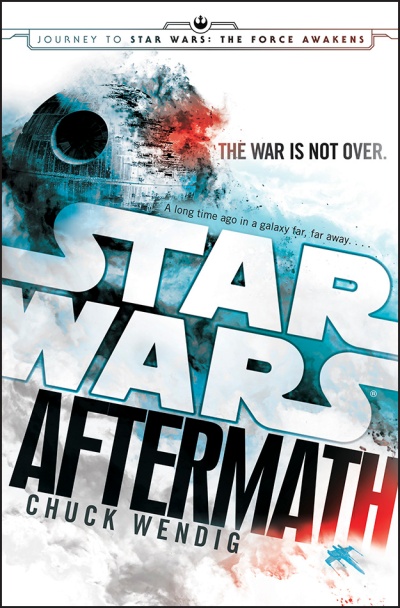 I’ve been talking with a few friends, and I’ve come away with the conclusion that actually, I’m not going to read Wendig’s novel, not yet. Oh, it’s here, don’t get me wrong: that sucker arrived on Force Friday, and after the package was opened I admit I petted the cover, just a little.

But I’ve learned something in the recent years, and that’s the joy of ignorance. It used to be, if there was a movie coming out based on a book I wanted to read, I’d read the BOOK before I saw the movie, assuming, of course, that the book would be better and I didn’t want to take any wind out of my sails by seeing the movie first.

What happened, instead, was a certain sense of boredom while watching the movie (or television show, as adaptations to television are QUITE popular these days). Sure, it’s fun to see how everything is adapted to the screen, but it’s not the same.

Now, I know Aftermath is not being adapted to the big screen. But I realized I just don’t want any insider knowledge. I’ll take what the posters give me, what pictures give me, but that’s it. I want to experience the movie as fresh as possible, and then, when the movie is over, I want to go home and consume all the stuff I’ve put on hold because I want the movie to tell the story on its own terms, and that’s how I want to follow it. I can fill in the blanks later.

So Force Friday came and went for me. Wendig’s book arrived, but that’s it. I expected more fanfare out of the day, more websites showing galleries of toys and the like, but I suppose I just wasn’t looking in the right places. And even if were, it’s hard to get excited over merchandise. After all, I haven’t seen the movie yet. I don’t know who my new favorite characters will be, which will heavily influence what I want to buy.

Except for BB-8. Have you all SEEN Sphero’s replica? Holy shit, I want this so bad I might fight a small child to get one. You can check out the full review here at Gizmodo, but if you just want the rundown, here’s the video:

And no, I don’t intend to terrorize my cat with this. Why do you ask?